Theatre / Lady in the Dark 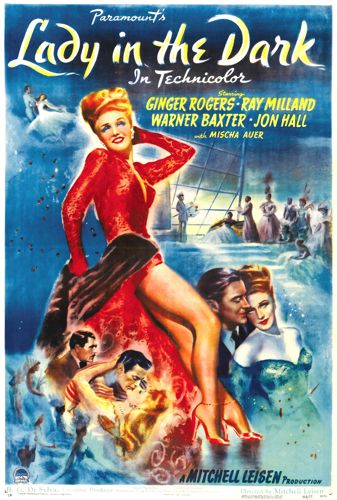 Lady in the Dark is a 1941 psychoanalytic musical play by Moss Hart, with lyrics by Ira Gershwin and music by Kurt Weill. The original production starred Gertrude Lawrence, with Danny Kaye in a supporting role. There was a film adaptation in 1944, directed by Mitchell Leisen and starring Ginger Rogers and Ray Milland.

Liza Elliott has been editor of the Fashion Magazine Allure for the last decade. Though she appears to be satisfied with her job and in complete control of her affairs, lately she has been overcome by depression and feelings of panic. Her irrational solicitude has been aggravated by the weird, fantastic dreams she has been having. It is furthermore no consolation to her that her longtime publisher, Kendall Nesbitt, has gone to the trouble of divorcing his wife so that she could be free to marry him, especially since handsome, hunky movie star Randy Curtis just walked into her office a few minutes before.

So Liza, on her doctor's recommendation, goes to visit a psychoanalyst to discover what is making her emotional state go to pieces, since she is a completely healthy woman aside from her irrational fears. The psychoanalyst, Dr. Brooks, notices the contrast between the glamorous personality Liza imagines herself as in her dreams and the real Liza's preference for severely tailored business suits, strange for a woman whose chosen career is in telling the most glamorous women what to wear. What finally helps Liza resolve all her worries is going back to memories of her childhood, in which she recalls the words of the song whose tune has haunted all her dreams.

This musical show contains examples of:

Alternative Title(s): Lady In The Dark