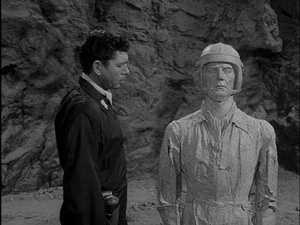 Fletcher beholds the Little People's statue of Craig.
Rod Serling: The time is the space age, the place is a barren landscape of a rock-walled canyon that lies millions of miles from the planet Earth. The cast of characters? You've met them: William Fletcher, commander of the spaceship; his co-pilot, Peter Craig. The other characters who inhabit this place you may never see, but they're there, as these two gentlemen will soon find out. Because they're about to partake in a little exploration into that gray, shaded area in space and time that's known as the Twilight Zone.

Astronauts William Fletcher (Claude Akins) and Peter Craig (Joe Maross), each of whom happens to be the chief thorn in the other's side, set down in a canyon on another planet to repair their ship. While scouting around, Craig finds a city populated by people no bigger than ants.

He begins terrorizing the population by crushing three of their buildings (Fletcher interferes with his destruction), proclaiming himself a god; although Fletcher said that the people are no different than we are, Craig believes that they've "been created in his image", even going so far as forcing them to build a life-size statue of him. Fletcher comes to inform him the repairs are done and they can depart, but Craig pulls a gun on him and orders Fletcher to leave him alone; there's no room for two gods.

Fletcher leaves disgustedly and, immediately, another ship lands. Two spacemen, big as mountains, emerge (they're repairing their ship). One of them picks Craig up and accidentally crushes him. The Little People rejoice at the death of their bullying "god", pulling the statue of Craig down, on top of his lifeless body.

Rod Serling: The case of navigator Peter Craig, a victim of a delusion. In this case, the dream dies a little harder than the man. A small exercise in space psychology that you can try on for size in the Twilight Zone.