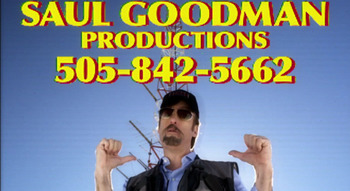 Hector holds court at El Michoacáno while Nacho collects from dealers. When Domingo can't come up with his quota, Nacho lets him off with a warning. "Who works for who," comments Hector as Domingo leaves. Resigned, Nacho drags Domingo into the back for a beating. Later, he distractedly injures himself while working at a sewing machine at the upholstery shop.

Kim makes her closing argument at the bar association hearing, arguing mitigating circumstances for Jimmy's break-in and confession. Rebecca goes to see Chuck after his humiliating testimony, but he won't answer the door: he's slumped on the floor in shock and disbelief. The bar rules that disbarment is too much for Jimmy McGill, but his law license will be suspended for one year. Jimmy and Kim are celebrating at Wexler-McGill when Rebecca arrives to ask Jimmy to help Chuck in his time of need. Jimmy refuses, having disavowed his brother for good. Rebecca realizes Chuck was right: Jimmy did only bring her in to make Chuck vulnerable. She tells him off for abandoning a mentally-ill man.

Stacey takes Mike to a grief support group, explaining how their family is adjusting to Matt's death. Stacey volunteers Mike to build a church playground, explaining that Matt always told her about how Mike let him pour concrete for their garage. Meanwhile, Chuck allows Howard in for some fine wine and harsh advice: leave Jimmy to his own devices and focus on rebuilding himself. What would Clarence Darrow have done if he wasted his talents on babysitting wayward siblings? Chuck agrees: "To new beginnings." Later, he forces himself to remove and then hold the battery from his tape recorder in his hand.

Jimmy and Francesca calls his clients to inform them of his "sabbatical". The last client on his list asks about his Fifi commercial specifically; Jimmy realizes he can't advertise his practice while he's suspended. Jimmy quickly calls a TV station to pull his commercials off the air, receiving a $4,000 fine for premature termination of his contract. Kim considers closing down the office and letting Francesca go, as Jimmy can no longer hold up his half of the rent. Jimmy refuses, but knows that he has to find some way to pay the bills.

Jimmy pitches a commercial to the owners of a carpet store, produced for cheap and broadcasted for free. While interested, they balk when he explains that they must film immediately as the air time is an hour away. Jimmy gives his film crew the bad news. When the make-up girl suggests they make a commercial for himself, he gets an idea. He drives to a satellite dish array to film his ad, but hesitates when he realizes that going into marketing after making his name as a lawyer would seem "off-brand" (to say the least). He asks for the make-up artist's satchel; he's going to "Karloff this shit."

At the Los Pollos Hermanos chicken farm, Victor and Tyrus get cocaine from the false bottom of a supply truck. Nacho and Arturo arrive to collect Hector's share, but Nacho gets a gun pulled on him when he takes six kilos: Hector promised five. Nacho explains that Hector expects him to return with six kilos. Tyrus calls Gus, who approves the deal; he's got bigger plans in mind then Hector's petty games, as it is revealed that he's standing in an industrial laundromat for sale. Lydia is waiting for him in a car parked out front. "So?" "It could work," he responds.

Wrapped in a space blanket, Chuck walks through downtown Albuquerque at night, braving the neon signs and traffic lights. Although his vision is bleary, he manages to make it to a payphone to call Dr. Cruz, who previously "treated" his EHS.

Nacho tells Hector about his standoff. Arturo takes a sudden phone call, prompting Hector to privately ask Nacho where his father gets his upholstery. When he warily replies with Jalisco, Hector tells him that he wants to circumvent Gus by using the upholstery shop as his new front business. Nacho explains that his father has no involvement with crime, but Hector "reassures" him that he can be taught and will be well-compensated. Arturo comes back in to report that Tuco got in a fight with a guard and another inmate and extended his prison sentence, provoking Hector into flipping tables. When he suddenly has a coughing fit, Arturo brings him some pills that he spills in his rage. Nacho makes sure to cover an unnoticed pill with his foot as Hector leaves.

Jimmy proudly tells Kim about his commercial for his new advertising business, selling his services to film commercials that he can run on the remaining airtime that "Gimme Jimmy" would've before. Jimmy plays the commercial for her: dressed like Steven Spielburg, he explains with tacky props and aggressive editing that business owners can combine their "natural charisma" with his expertise to attract customers normally glued to their TVs. With a promise that he can have their commercials on the air tomorrow, he signs off: "Call me, Saul Goodman!" A stunned Kim can only note: "That guy has a lot of energy." "It's just a name," Jimmy replies.