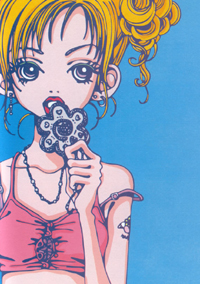 Gokinjo Monogatari (Neighborhood Story) is a seven-volume Slice of Life manga by Ai Yazawa that ran in Shueisha's Ribon magazine from 1995 to 1998. It tells the story of Mikako Koda, a teenager who dreams of becoming a fashion designer, her childhood friend beau Tsutomu Yamaguchi, and their friends,all of them students in the Yazawa Arts High School.

Several characters have appearances in Paradise Kiss, which is a Spin-Off continuation. It was adapted into a 50-episode anime, a feature film, and a CD-drama.