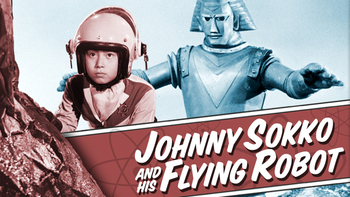 Giant Robo, into the air! Up and Away!!!

The future has shone upon us with its glorious brilliance...
"You have a lot of courage for a boy your size."
"Yeah but I'd rather be tall like you."
"You will!"
Advertisement:

See also: Shin Mazinger, another great Super Robot series by Yasuhiro Imagawa. Like Giant Robo, it is a revival of a classic series and involves heavy crossover from the original artist's entire body of work. Alternatively, the 2004 Tetsujin 28 anime, also directed by Imagawa based on another famous Yokoyama story with similar design aesthetics and a few bits of Retroactive Recognition (The depiction of Kenji Murasame and Robo's "Gao" noise reused for Tetsujin's roar, most notably).