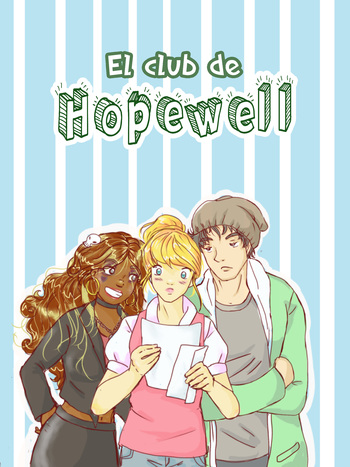 It all started with a letter...

The Hopewell Club (in Spanish: “El Club de Hopewell”) is a web original comedy by Anthony Tesla (Anthony_H on this wiki) about the lives of three high school students: Allyson (a smart , cynical yet romantic girl), Jake (a criminal often involved in things that he doesn't even seem to be able to keep track of) and Sarah (a cute but mentally unastable gothic girl)

In essence, it's a Slice of Life kind of work, with some cartoonish and surrealist elements throwed into the mix; the series doesn't take itself too seriously, subverting and lampshading all kinds of tropes and conventions about teen stories, but always in an affectionated way...

...when is not being...almost anything else. Due to the constant parodies, hommages and Out-of-Genre Experience scenarios, the book series is well known for not being that much of a teen comedy and more like a excuse for satirizing pop culture, both current and some other more "clasical".

If you read Spanish, you can read the series here: http://www.wattpad.com/2873268-el-club-de-hopewell-capitulo-i-la-carta

; The author is looking for some help to translate it into another language, by the way (I'm just saying...)