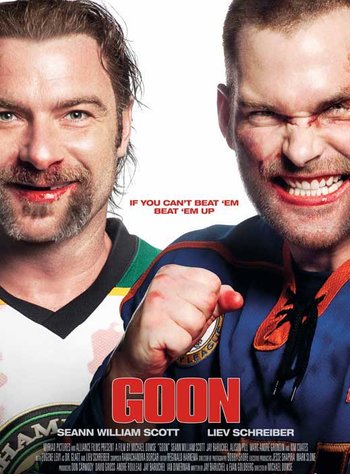 Goon is a 2012 Canadian comedy film about the life of a minor league ice hockey enforcer written by Jay Baruchel and starring Seann William Scott. The film is billed as a Spiritual Successor to the 70s classic Slap Shot with more blood and gore.
Advertisement:

Doug Glatt (Scott) (based on the real life player Doug Smith) is a slightly dimwitted, but generally kind bar bouncer from western Massachusetts who packs one hell of a punch. While attending a hockey game, he gets into a fight with a player and impresses the coach of a local beer-league team, who offers him a position. Doug gets the role of an "enforcer," an untalented player who is primarily responsible for protecting his teammates and brawling with their opponents.

Doug's impressive fighting skills get him invited to a minor league team and charged with protecting its star player Xavier LaFlamme, a former NHLer who got busted down to the minors after a confrontation with legendary enforcer Ross Rhea (Liev Schreiber) left him shell-shocked. Over the course of the movie, Doug must navigate a complicated relationship with a hockey groupie, Eva, reconcile his new career with his bookish family, and prepare for an inevitable collision with Rhea himself.

It was followed up by a sequel, Goon Last Of The Enforcers