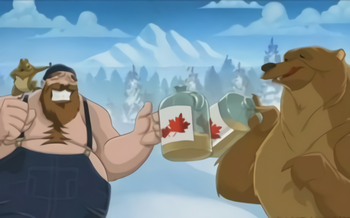 In Canada! note Eh?
"In Canada, you can go to an all-nude strip club and order alcohol. That's right. From Moose Jaw to the Bay of Fundy, you can suck down a 20-ounce Pilsner while watching some coal miner's daughter strip down to her pelt. Jealous?"
— Robin Scherbatsky, How I Met Your Mother (Worth noting: you can do this in one spot in Vegas or anywhere in Oregonnote and you can't actually do it in Moose Jaw, since Saskatchewan has more restrictive laws.)
Advertisement:
In accordance with Canada's official policy of bilingualism, this page is also available in French.
En accord avec la politique officielle du bilinguisme canadien, cette page est également disponible en français.

In American media, Canada is a sweet, quirky and slightly backwards version of America. It's as if you took everyone from Minnesota, gave them an obsession with hockey note Anyone who thinks this should be clarified to Ice Hockey will be stiffly beaten by the RCMP, with a hockey stick. (OK, it's practically an unofficial religion), and made that an entire country. Everybody's white (except the First Nations), and if someone's last name isn't French, then they have a Scottish note or otherwise English/Welsh name.note  and sometimes both, It's not rare to find "Pierre MacDonald" or "Iain Beaurepaire" in Canada.

Keep in mind that Canada, Eh? has no West Coast (besides ALL of British Columbia) and no mild winters (except for Vancouver). The warm weather stops right about at the border (unless it presents a passport).

Eeeeeh, Canadians eat nothing but Kraft Dinner (which is Canadian for "macaroni and cheese"), Tim Hortons, doughnuts, poutine note French fries with cheese curds, and enough gravy to partially melt the cheese, and Canadian... er... peameal bacon ("Canadian bacon" is actually completely different from peameal and you cannot actually get it in Canada). Anglophone Canadians all speak with a stereotyped West/Central Canadian English

accent, putting "eh" at the end of questions or affirmations note although New Zealanders say "eh" more often than even the most stereotypical Canadian

, but again, not many people outside both New Zealand and the Land Down Under know this, and prominently raising the "ou" in aboot every word containing it. Also, as per the page image, Canadians are famed for shamelessly holding their maple syrup jugs on the non-handle side.

The army consists of a guy with a BB gun mounted on a moose, the air force a paper airplane note and the Avro Arrow, the coast guard a guy with a pair of binoculars and a rope, and the navy a guy in a canoe with a slingshot. note Americans military personnel who have served with Canadians throw this trope around for jokes, but in reality, tend to see Canadians as a professional force. In fact, the Canadian army has been quite aggressive

All policemen are Mounties, and they wear their red serge dress tunics and broad-brimmed Montana Peak hats constantly, even while on regular duty.

Canadian technology is always behind American tech. note Except of course, Canadarm, ATI, Corel Wordperfect, the telephone and Alexander Graham Bell himself, the Blackberry, the Learjet, IMAX theaters, Toon Boom, wheelchair accessible buses, electric wheelchairs, snowmobiles, snowblowers, egg cartons, gas masks and the aforementioned Arrow... In fact, if it wasn't for the Americans they'd have no culture at all.

However, Canada is more socially advanced than the United States. Homosexuality has been condoned in Canada for longer than in the United States, LGBT rights are more comprehensive and are applicable nationwidenote so any attempt to Cure Your Gays is illegal here, Canada has free universal health care note except when it comes to pharmacare (although Canada is known for having genericized prescription drugs in large quantities) and dental care, cannabis is fully legal nationwidenote so feel free to 420, Blaze It here, multiculturalism is made law, public transit does not have as much negative stigma, gun control is stricternote so not Everyone Is Armed here and Moral Guardians have very little influence in Canadian popular medianote though video game ratings from the Entertainment Software Rating Board are legally binding in some Canadian provinces, such as Manitoba and Ontario, unlike in the United States.

Feel free to whack us Canucks over the head with a hockey stick. And doon't feel soarry aboot it, eh! We'll just apologize to you for possibly damaging your hockey stick, because that's the Canadian way, eh?

Canada has a great capacity to laugh at ourselves and not take ourselves too seriously. In fact, we have the largest international comedy festival in the world and its associated Long-Running Candid Camera Prank show, Just for Laughs: Gags, is internationally syndicated in over 150 countries.

Oh, but remember: No matter how polite and well-mannered Canada, Eh seems to be, there are always some exceptions. To say nothing of Canada Geese which look majestic but are basically just flying pooping miniature velociraptors. Be afraid.

Useful Notes about non-fictional Canada now has its own page.

Also see Canada Does Not Exist, and Minnesota Nice for the American equivalent.

This is followed by the Simpsons visiting Toronto. They are seen on a bus with an RCMP officer, a hockey player, and a Sasquatch.