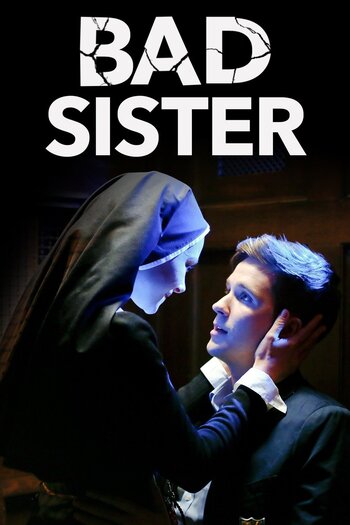 How do you solve a problem like Sophia?
Advertisement:

Bad Sister is a 2015 Lifetime Movie of the Week written by Barbara Kymlicka (and seemingly adapted from some adolescent Catholic schoolboy's delirious sex fantasies) and directed by Doug Campbell.

St. Adeline's, a Catholic high school in Southern California, welcomes a new teacher, a nun from Montana named Sister Sophia White (Alyshia Ochse). The young, attractive nun makes a splash at the school because of her unconventional ways. She doesn't lead her homeroom class in the morning prayer, and she lavishes quite a bit of attention on Jason Brady (Devon Werkheiser), a student who's gained a following on the Web with his music. But no one at the school is aware that Sophia is an imposter. Things spin out of control when she seduces Jason into a sexual relationship, frames his sister Zoe (Ryan Newman) for cheating, and gets Sara (Sloane Avery), a classmate who's also pursuing Jason, suspended from school. Zoe decides to start digging to find out the truth about Sister Sophia.