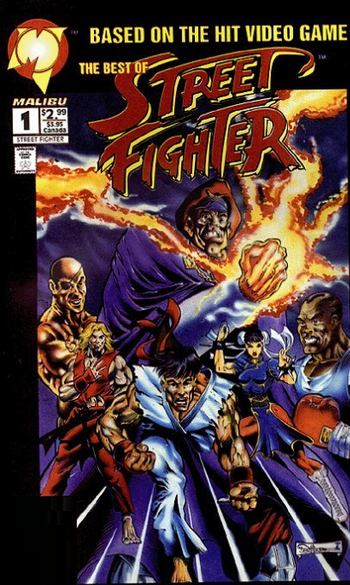 Created by Malibu Comics, the company behind The Ultraverse, Street Fighter is a 3 issue comic book series that was adapted from the Capcom fighting game series, Street Fighter.
Advertisement:

The comic debuted in 1993, when the Street Fighter storyline was nothing more than an Excuse Plot tucked away in the instruction manual of Street Fighter II. Despite this, Malibu chose not to use most of it and instead made their own story only keeping certain details. These changes included making Ryu and Chun-Li training partners and a romantic couple, having Ken retire from fighting, becoming Ryu's manager as well as a TV star and getting killed and scalped in the second issue. Due to these changes, Capcom themselves pulled the plug on the series after three issues.

These comics were also published in Brazil, but after the series ended, the publisher decided to carry on with local artists while continuing the numbering, by adapting Super Street Fighter II instead. Issues 4 and 5, Marcelo Cassaro tried to pick up the slack, with stories alluding to the American comics' events but already straying from the canon they established in Fei Long and Cammy's introductions. From issue 6 onwards, new editor Alexandre Nagado decided to throw everything Malibu had done to the license away and start anew, with Ken being alive and well, characterizations closer to the games and a Tournament Arc based on SSFII in the first three issues. This series then followed through with a few multi-issue stories, going through a Schedule Slip until it stopped publishing with issue 20, with an Aborted Arc centered around Akuma that ended in a cliffhanger. Elements from the anime Street Fighter II V and Street Fighter were also used. In 1998, Marcelo Cassaro obtained the license of Street Fighter, publishing the Brazilian version of Street Fighter: The Storytelling Game and a Animesque adaptation of Street Fighter Zero 3 drawining by Erica Awano, who also illustrated Novas Aventurasde Mega Man and Holy Avenger.

Not to be mistaken for the The UDON Comic.