The Residents of Discount Zoo. 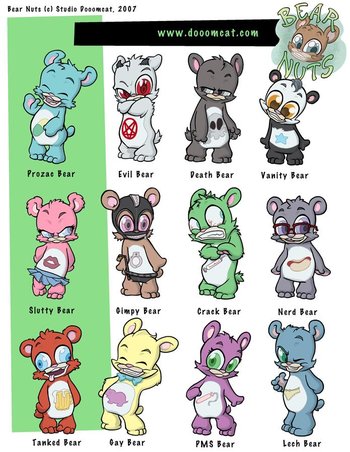 (Color: Teal, Insignia: green/yellow capsule): The de facto leader of the bunch. Relentlessly cheerful... until his meds run out.

(Brown with gimp mask, handcuffs): Silent, kindly medic with an implied kinky side; the most compassionate of the bears.

(Grey with glasses, hot dog): The wimpy fanboy of all things nerdly. A total weenie.

(Dark grey, skull): Dark, broody, and mysterious. The least social, Death rarely appears except to fix the major screwups of his fellows.

(Green, syringe): Permanently in withdrawal, tweaked and stressed out.

(Red, mug of beer): Alcholic in a near-permanent state of intoxication. Good thing he's a cuddly drunk. The most outwardly affectionate of them all.

(Pink, kiss mark): Cara's sister. Can be a total bitch sometimes. Likes to use her pheromones to make others do her bidding.