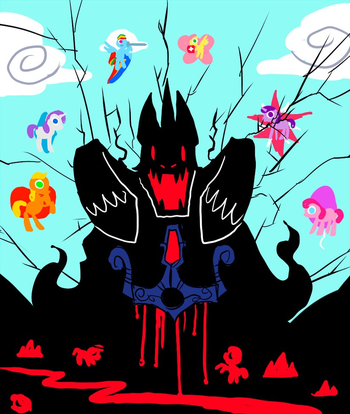 Your body...It haunt me...Your flesh is oh so haunting!
Advertisement:

A webcomic style story written and drawn by ~Metal-Kitty on Deviantart, based on the characters of My Little Pony: Friendship Is Magic. After Celestia reveals what is seemingly a false alarm, the Main Six return to Ponyville only for Twilight to be haunted by a demonic looking foe in her dreams. After a week of sleep deprivation, Twilight turns to Fluttershy for help, only to be assaulted later that night by the creature from her nightmares, later revealed to be a unicorn named Starflare. While Twilight is resting in the hospital, the plot unfolds that Starflare is after an evil artifact simply known as: “The Dark Crown”. While the characters and concepts are overall faithful to the show, the webcomic itself contains gore, violence, and even onscreen Character Death.

A redux of the first page can be read here: MLP Project 001 Redux

Two prequel spin-offs were released: Ballad of the Broken

and Blood is Thicker

A couple comments contain links to the next page, and later on, ~Metal-Kitty installs links himself.

WARNING: This page is heavily outdated, and requires updates.