Web Video / Danganronpa The After 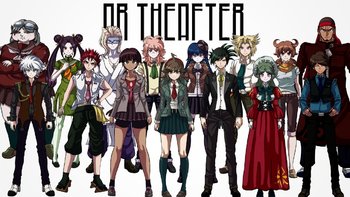 It was decided, by chance, that I should enter the place I had been longing for so long; Konoe Shimatate, with her heart pounding from excitement, finally passes through the school's gate. At that moment, however, she lost consciousness, and upon coming to, she found herself in a certain classroom. And thus, together with 14 "Super High School Level" students, who will be her classmates, She gets caught up in the "despair" she didn't expect...

The fangame is currently in progress and has already finished it's second Chapter. The official website can be found here

Tropes in Danganronpa TheAfter include: