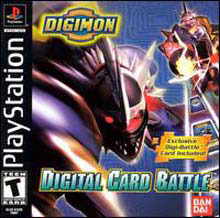 Digimon: Digital Card Battle is the second Digimon card battling game penned by the same creators of the original Digimon World. (The first card battle game was never exported.) Though similar to the Digimon TCG at the time (a card from which is included with the game as a bonus for purchase) it is actually a different, much simpler card battler. With stellar 3D battle animations, a soundtrack that includes songs from Digimon Adventure (Well, in Japan, anyways) and fun, fast-paced gameplay, it has become a cult hit among Digimon fans.