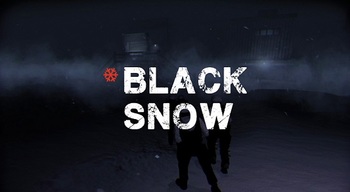 It's been a week since the Amaluuk Research Station's gone dark. It might just be a severed landline — it is in the middle of snow-battered nowhere, somewhere in Greenland — or it just might be the death of you.
Advertisement:

You're John Matsuda, an IT specialist being chugged out to the Amaluuk Research Station with several other "IT specialists" to investigate why the station's gone dark. What's supposed to be a routine service leaves all of your coworkers separated, dead, or worse, and, as nightfall and below-zero temperatures take over the station, leaves you to find out what's happened.

A Half-Life 2 game mod, you can download it here

. Please note that as of August 1st 2013, the mod was made unplayable following a steamPipe update. A patch was released in December 2015, though its stability is somewhat contested.