Toys / Monster in My Pocket 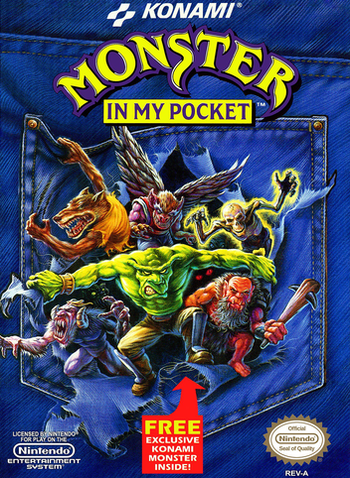 Monster in My Pocket is a media franchise developed by Morrison Entertainment Group, headed by Joe Morrison and John Weems, two former senior executives at Mattel.

The focus is on monsters and legendary creatures from religion, mythology, literary fantasy, science fiction, cryptids and other anomalous phenomena. Monster in My Pocket produced trading cards, comic books, books, toys, a board game, an Nintendo Entertainment System video game by Konami and an animated TV special, along with music, clothing, kites, stickers and various other items. Today, it's now part of the much larger "...in my Pocket" franchise which, had expanded to include more than just monsters (e.g., Puppy In My Pocket, which had been adapted into an Italian-produced animated series).

The line proved controversial for various reasons. Many changes were implemented that took it away from its original mythmaking focus, though it recently re-emerged with the original idea intact in 2006 in the UK but with less than desired results.

Not to be confused with Pocket Monsters, a.k.a. Pokémon; this confusion is exactly why Pokémon is called Pokémon in the West (and later everywhere else) to begin with.

Alternative Title(s): Monster In My Pocket