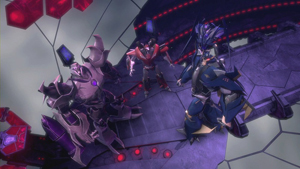 Maybe this episode should've been called "The Nemesis Within"?

As the Decepticons assess the damage to the crashed Nemesis, Soundwave discovers that Bulkhead was responsible. Knowing that Optimus is unlikely to pass up an opportunity to strike while they're vulnerable, Megatron commissions the use of Dark Energon to get the ship up and running, against Knock Out's protests. Sure enough, Optimus has decided to end the war today by unleashing the Spark Extractor to wipe out all Decepticons in range. Believing this to be the final battle, Fowler is able to convince Optimus to allow him to join the mission to observe Megatron's demise.

The Nemesis is already off the ground by the time Team Prime arrives, and quickly engages the Autobots. However the Nemesis deploys a stasis beam, one Megatron's command staff themselves was unaware of, which begins freezing the Autobots in place one-by-one. Optimus' desperation to end it bears no fruit, as he is frozen as well. Megatron orders the Nemesis to move closer to retrieve the Spark Extractor, but the ship moves on its' own and away from the WMD. Fowler notices this, and radios Ratchet for assistance. Megatron furiously demands that the ship be brought back under control, but the Vehicon piloting the ship is suddenly killed. Knock Out posits that the Nemesis now has a mind of its' own, and he's proven correct when a huge, booming voice warns the Decepticons that he is now in command of the vessel and that they should not interfere in its' mission. Knock Out observes that the Nemesis is decoding the Iacon database with better skill than they were, but Megatron roars for the ship to be brought back under control. Soundwave's attempt to do so results in him being zapped into stasis lock. After being jolted by the rebelling Nemesis entity, Megatron orders every member of his forces to bring the ship to heel, only for everyone to get knocked into stasis lock, including Megatron.

At Omega-1, Ratchet deduces he can't free the Autobots from stasis lock, and then notices he can actually track the Nemesis, meaning their electromagnetic shield is down. With little other options, Ratchet simply calls Megatron to ask what's going on, only for the Nemesis to respond. The ship informs them that it has taken command over Megatron and shows how it's stasis-locked the Decepticons, before cryptically hanging up when asked why it's gathering the relics. Fowler mentions how the ship ignored him earlier, and Ratchet is persuaded into letting him and the kids bridge aboard the Nemesis to download the Iacon database for the Autobots.

Aboard the ship, the humans find a port to plug in a jump drive to download the database, and notice the Nemesis is heading for Manhattan for the first relic it decoded, and will likely destroy whatever part of the city is in the way. While trying to change the ship's course, Fowler is electrocuted by the Nemesis, who's still unable to actually find the humans since it's looking for Transformers, not organics. Jack hits on the idea of reversing the Energon flow of the ship to purge the Dark Energon from its' systems. The kids head for the power core and find the stasis-locked Megatron, realizing they are on the right track since he was frozen attempting the same thing. The ship finally finds the kids and sends a manipulator arm after them, but Jack tricks the ship into hitting Megatron, sending his body toppling and reversing the Energon flow. The stasis-locked Autobots come to as the Nemesis entity shuts down, though to the kids' horror, this means the Decepticons are waking up as well. They race back to the Iacon database console to find their jump drive has only downloaded four decoded entries, and while Miko and Raf get the delirious Fowler to Ratchet's groundbridge, Jack tries to retrieve the drive. Knock Out comes to and menaces him for a moment, but Ratchet arrives and delivers a whopping punch to his Evil Counterpart before departing with the kids and the entry. Megatron is not amused.

At the base, the Autobots realize they must go for the relics quickly, since the now lifeless Nemesis, back under Megatron's control, is now bearing down on Manhattan...