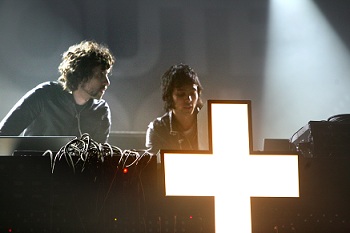 Justice, often stylized as Jus†ice, is an Electro House duo consisting of the Frenchmen Gaspard Augé and Xavier de Rosnay. They have a unique style of Electro House heavily influenced by funk and disco.

They have released six albums:

Along with one EP:

Apart from the disco and funk influences of electro house, their style has been thought of as having some heavy metal influence and combines cut-up bass lines with a compressed and distorted synth sound. Their music often includes bass slapping.