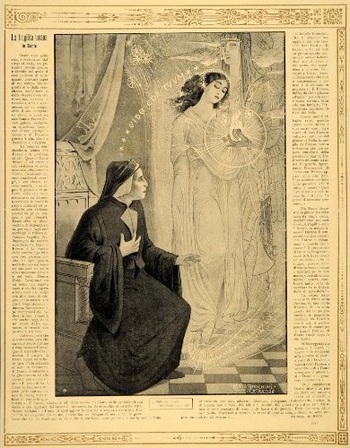 A collection of Courtly Love poems by Dante that attempt to capture the divine beauty of the World's Most Beautiful Woman, Beatrice.

The collection is made up of over 30 poems (mainly sonnets) written from 1283 to 1293 with prose sections before and after each poem to provide historical context. All of the poetry relates to the poet's infatuation with Beatrice, starting from their meeting at age nine to a vision he has of her a year past her passing.

The Vita Nuova is the epitome of the Courtly Love genre and Christian treatments of beauty. The promise the poet makes here to praise Beatrice in a wholly new way would only be completed in the collection's Sequel, The Divine Comedy.

are both freely available online. Unless noted otherwise, English quotes on this page are probably from Frisardi's translation.

The Vita Nuova provides examples of...