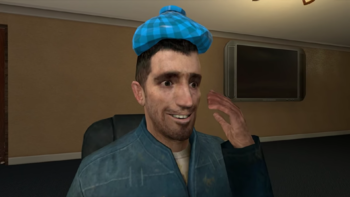 Huh, so sticking your head in a blender works wonders after all!
A citizen who once lived in City 17, now granted his own home by Dr. Breen after the second episode of his pirate TV show, The Gmod Idiot Box was released.
The Gmod Idiot Box started out as a pirate television show Das Bo Schitt created, that was accessible through a secret tuning each day at 6:00 PM. The show's original purpose was to boost the morale of the citizens in hopes of battling the combine much more effectively. When a home was raided by Combine officers one day during one of the showings, one particular civil protection officer took notice of the show and enjoyed it, ultimately obtaining the frequency of the show and spreading it around to the rest of the Combine. Eventually, word of it made it all the way back to the citadel. Dr. Breen didn't personally enjoy the idiotic show himself, but because it boosted even the Combine's morale significantly, he gave the show it's own public channel within the city, mostly playing reruns due to slow production, and relocated Das Bo Schitt out of City 17 and into his own home away from regular Combine juristiction as reward for his un-intended deed for all citizens and Combine alike.

Das Bo Schitt now lives in the quiet neighborhood of "Evocity" where apparently the first civil protection officer to stumble upon his show shares the house with him. 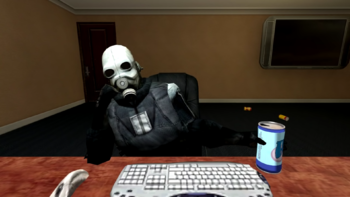 Some say he still waits for episode 16 to this day.
He was the first civil protection officer to stumble upon the Gmod Idiot Box, as well as the very first soldier ever to be created of the Combine force. He was designed as an android with simulated human thought. After many tests of the soldier's capability, they realized many strengths and weaknesses with the projects. The up-sides being, he had incredible strength, capabilities and made descisions rather quickly, as well as acting upon them almost immediately. The down side was, he turned out just a little TOO human. He found so much hilarity in things and often ignored orders, going rogue in favor of getting his own way. He was never arrested or brought back in for further design touch ups because for one reason, the project already costed a ton of funding and Dr. Breen dared not spend another cent, having already scrapped the project in favor of the cheaper method ... converting humans into mindless soldiers. The other reason? He was simply too damn good at what he did, being the most capable soldier of the entire Combine army, regardless of his otherwise weird, unorthadox and rogue methods.

Imagine #1 as a 14 year old spastic gamer in an adult body and you'd pretty much sum up his personality. Where he sucks horribly at book smarts, he excells highly in street smarts and will do whatever it takes to get what he wants, usually through means of playing dirty and unfair. He'll attempt to win a boxing match by kicking his opponent in the groin or breaking something and using it as a weapon. Unlike the other civil protection officers, #1 prefers a crowbar rather than a stunstick, for it provides multiple uses and doesn't need to be charged.
Today, #1 reigns not only as the first soldier, or the first Combine to come across the show, but also is considered the #1 fan of the Gmod Idiot Box. A month after episode 2 came out and became available on YouTube, he became impatient for the next episode and tracked Das Bo Schitt down in Evocity, ramming his car off the road and forcing him to hurry up and make the next episode. A month later, #1 caught him vacationing without any announcements to the public and stole a headcrab canister, launching it to his location and forcing Bo Schitt to make the next one. After a while, Bo Schitt realized there was no running from #1 and decided befriending him was the best course of action. By episode 4, #1 had moved in with Bo Schitt, finding and beating the YouTube stick figure plague, "Bob" to keep Bo Schitt's patience in good standing. Ever since, the good outweighed the bad and they became mutual friends. There will always be times when #1 is an asshole, but there's always some price to having constant protection and over the top beatings of those that simply annoy. Besides, #1 seems undeniably fun to have around. 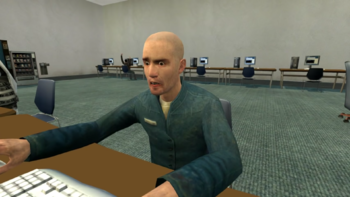 Chuckles encounters someone much worse than him.
Chuckles is infamous for many things. His pranks on others originally surfaced as a coping mechanism for the unfortunate state of the world after Earth's surrender, but got too much enjoyment out of it and no longer has to cope anymore. Now griefing is a state of mind for Chuckles, finding so many ways to prank and grief others with his shenanigans for endless laughs. Chuckles had worked in cyberspace for a very long period of time to the point where he discovered how to literally hack the very fabric of reality, simply by using an average cell phone.
Due to this, he was given a wide range of abilities, like passing through walls, making himself unusually fast, or even indestructible. He passed the word on to many citizens and thus, hacking was the new epidemic in the city.
Many citizens however, don't grasp the full potential of their hacking and are usually able to be handled by the average Combine soldiers, but Chuckles still proves a real nuisance to everyone including Dr. Breen, making him a priority one target for Dr. Breen's counter-hacking plan. #1 however will not pursue Chuckles, for he finds what Chuckles does hilarious. 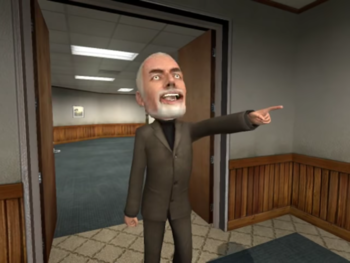 Don't mess with the admin.
Dr. Hax was created by Dr. Breen as the ultimate countermeasure to the damage caused by the year of the hacking outbreak.
Still, many citizens including Chuckles continue to hack to this day and Dr. Hax is always there to stop them. Created to look exactly like Dr. Breen, Hax was given a giant head so everyone will remember Breen's face ... a reminder of who they're dealing with in the city. Granting admin privilages to the world around them to combat hackers easier, Breen even armed Dr. Hax with what was known as "LUA Monitors." These monitors were modeled after large, heavy CRT monitors, which are incredibly accurate and hurt like all hell when they hit. They are also designed to restore the default settings of their target, returning anything out of the ordinary back to normal on impact.
Telekenetic launching is the method of which these monitors travel, often summoning monitors into being, or simply launching a monitor from nearby after it's coded manually by Dr. Hax once he has control of it. Sometimes however, Dr. Hax is quick to jump the gun and wrongfully accuse someone of hacking when it seems "too good to be true." A good example of this was when a fight broke out between #1 and Das Bo Schitt in the Evocity streets.
He noticed #1's weilding of a full sized car and called hax upon him, only to be knocked out by the flying car, which was thrown by ultimately legitimate means, as #1's strength is still something to be feared. 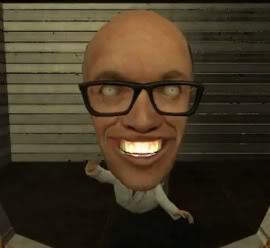 Wanna know the most annoying sound in the world?
During the hacking epidemic in the city, many machines, including the ones in Dr. Kleiner's lab were suffering breakdowns and sometimes even explosions. This was due to the fact that the serious ammount of hacking around the city created rips in the fabric of reality, creating an unstable fusion of reality and fiction in the form of data. This rogue data appear in the form of what was best described as "nonsense" appearing out of nowhere. While Dr. Kleiner was watching the movie, "Dumb and Dumber" on his lab computer, a nearby hack cause a rip that became so severe, the computer exploded in his face, causing a fusion of Kleiner and the fictional movie. Thus, UberKleiner was created and though Dr. Kleiner was never hurt from the incident, UberKleiner lives on through the rips in reality, appearing at extremely random moments to share with everyone ... the most annoying sound in the world. The lazer cannon blasts during such a sound still has yet to be even explained, but then, no one has been able to make sense of what comes of these rips in reality. 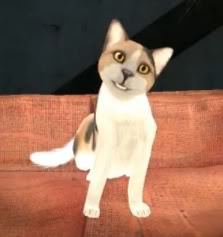 Gravity Cat is not amused.
The result of the resistance science team's attempt to create an advanced teleportation rift. When a lab cat was sent through the rift as the first teleportation experiment, it never came through to the other side and was lost. A week later, sightings of a feline with the same description as the one in Kleiner's lab, showed up in an abandoned home along the coast. Rumor had it, the cat was able to defy the laws of gravity and had un-explainable, dangerous powers at it's disposal, but only when it was un-amused. Since then, the quest to amuse the cat was on, just to see if it would bring good to the ones that amused it. Unfortunately, a man in a purple suit stepped forward in an attempt to satisfy the feline with a number of horrible dance moves. The man failed and the one they called "Gravity Cat" escaped, blowing away everything in his path. He eventually found his way back to Kleiner's lab late at night and caused terrible damage. To this day, Barney still struggles with nightmares of the Gravity Cat, even though he was already long gone after exacting it's revenge. One can only assume that the abrupt arrival of Gravity Cat sightings means that it too travels through the rips in reality, much like UberKleiner.