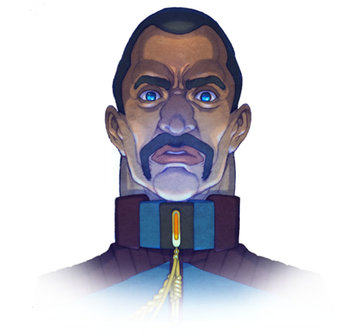 "Well, I'd like to relax over a coffee now, but it seems that's not possible."

The commanding officer of the Bellwether. Max is responsible for directing the actions of the Fighting Thunder and their mission locations. He also loves his coffee a lot, more than fulfilling his duties. 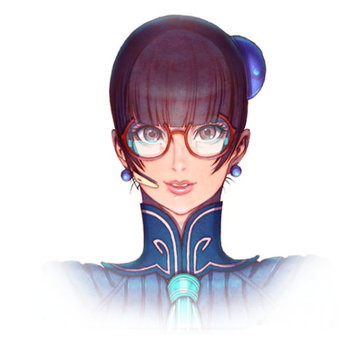 "It's Mars! This atmospheric composition is exactly the same as Mars!"

The communications officer of the Bellwether. Eshiria communicates directly with the player regarding mission objectives and assesses the player's performance upon completion of each objective. She is the first person to determine the fate of the alien homeworld that Fighting Thunder was sent to assault, and how this fate relates to the Crystals as a whole.
Valbarossa Hawkeye 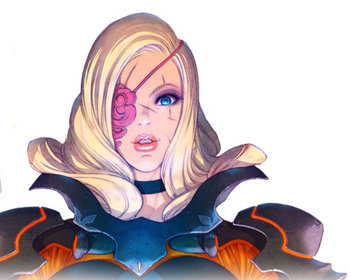 A pirate mercenary hired by Campbell to steal Crystals from the Bellwether. She serves as an antagonist until her flagship becomes contaminated by the Crystals. Then she joins Fighting Thunder to assist in assaulting the SHIFT facility.
Walter Erick Campbell 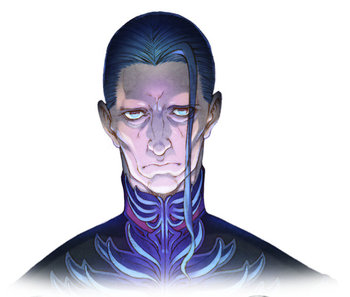 "You stupid commoners who don't understand the righteousness of SHIFT!"

The head of weapons development for the VCD and a researcher for the SHIFT organization. Lieutenant Campbell serves as the main human threat to Fighting Thunder. However, were it not for him and SHIFT's efforts, Fighting Thunder and the Bellwether would have never existed.
Helga Lindenbaum 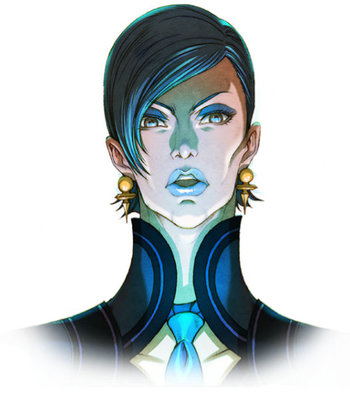 "Thanks for being so considerate. Although, I'd be even happier if you didn't increase my workload."

Helga: Simply said, the information that comes into contact with crystals is being leaked to all the contaminated weapons.
Max: I see. So they are making it as unclear as possible as to where they're heading.
Helga: That's correct.

The main antagonists of the series. The Crystals are responsible for all the events happening in the series.