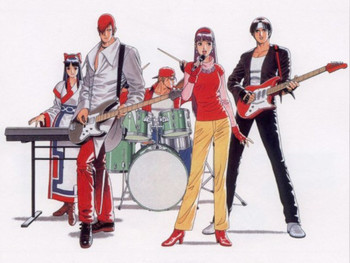 The Band of Fighters! (Yes, that's a real thing.

SNK may be best known for their assembly line of cheap, sadistic bastards, but hey, at least the stellar soundtracks made the beatdown something to look forward to. Enjoy! All tropers are encouraged to listen to these songs ASAP.

open/close all folders
Franchise-Wide Leitmotifs
Yes. SNK has songs that are so omnipresent throughout the entirety of their games portfolio that they get their own section.

A line of songs that is not only associated heavily with Kyo Kusanagi and KOF as a franchise, but SNK themselves, being named after their headquarters in Osaka, Japan.

A line of songs associated heavily with Iori Yagami. As their name implies, they are all jazz songs that always incorporate heavy usage of the saxophone.

The theme of Geese Howard, and one of the most iconic series of boss themes in fighting game history.

The King of Fighters '95

The King of Fighters '96