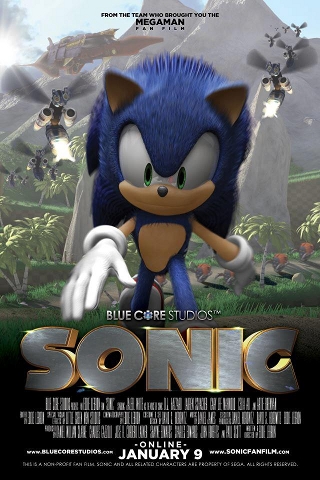 Sonic is an 18-minute long Fan Film based on the Sonic the Hedgehog franchise. It was written and directed by Eddie Lebron, and released by Blue Core Studios, the same company that released the fanmade Mega Man (Eddie Lebron) film. The film was developed to see how Sonic would look in a live action environment, and faced the high expectations of the Sonic fanbase.

On the peaceful Planet Mobius, the evil Dr. Robotnik, formerly acclaimed roboticist Julian Kintobor, declares war on the world. He begins his path of destruction by wiping out all intelligent animal life on South Island. Three months later, the Robotnik Empire now occupies Station Square, often taking over the city's television networks to spread propaganda. Robotnik faces opposition from G.U.N. units, who are vastly overwhelmed by his robotic forces; however, an unknown hero dubbed the "Blue Blur" allies himself with the underdog and rescues a number of units in the fight against Robotnik. Three weeks on, Robotnik and four G.U.N. soldiers discover the identity of the freedom fighter — a surviving South Islander who's a wisecracking, laidback, blue hedgehog called Sonic that can run at supersonic speeds.

The film gained a lot of attention, particularly when it was announced that Jaleel White was reprising his role as Sonic after voicing the character in Adventures of Sonic the Hedgehog, Sonic the Hedgehog (SatAM) and Sonic Underground.

This is not to be confused with the official film adaptation from Paramount or the OVA Sonic the Hedgehog: The Movie.