All spoilers for Undertale are unmarked. You Have Been Warned! 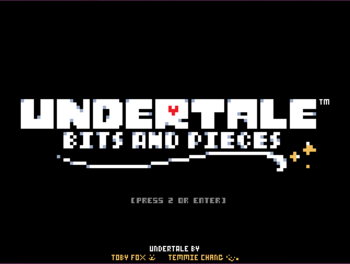 The story of man and monster, retold.
"The game you've come to love, now with bits and pieces of new content!"
— Underevent 2021 trailer
Advertisement:

Created by Team!BNP, Undertale: Bits and Pieces is a Game Mod of Undertale featuring completely overhauled graphics, new areas, new enemies and remixed music as well as featuring content carried over from its (sort of) sequel, Deltarune.

Currently, the mod is still a work-in-progress, and has most content up through Hotland completed. It may be downloaded from GameJolt here

Undertale:Bits and Pieces provides examples of: