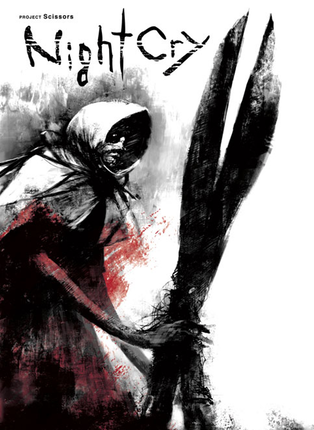 Nightcry is a Survival Horror game developed by Nude Maker games. The game is a Spiritual Successor to the original Clock Tower games (being directed by the director of the first two games also helps). Like its predecessor, the player characters do not have access to weapons. As such, the player must run and hide or else suffer shear death.

The game is set aboard a luxurious cruise liner called the Oceanus on August 18, 2016. This cruise begins from Venezia, Italy, making a stop at Southampton, England, then finally crossing the Atlantic en route for the Caribbean Islands.

The heroine and her friends are college students from North America that had fieldwork training in the Aegean islands, making their trip back on this cruise liner. However, a group of cultists sneaked on board.

As the ship sails across the deep blue ocean, a series of gruesome and mysterious murders begins to take place by a female creature called Scissorwalker, including those of the ship's crew. Soon the ocean liner is crippled and adrift at sea, and has become an inescapable death trap for the passengers.

As Monica, Rooney, and Leonard, passengers of the ship, the player is tasked with solving the murder mystery to ensure their own survival as well as the rest of the ‘innocent’ passengers.

The game was released on March 29, 2016 for PC. The mobile version will be released in a later date.

You can read the original Kickstarter page here