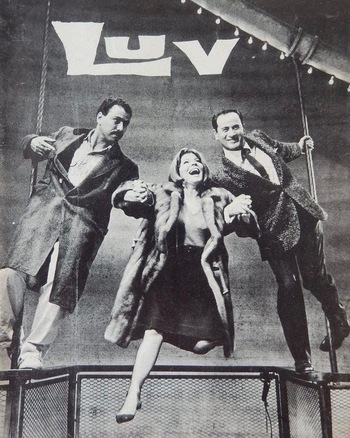 A 1964 play written by Murray Schisgal, Luv is a farce/absurdist comedy of errors about three people, two college friends and the wife of one of them, who share stories of their miserable lives on top of a bridge. Harry has no one to love, and Milt tries to foist his wife Ellen on Harry, so Milt can run off with his mistress Linda.

The original Broadway production starred Alan Arkin as Harry, Eli Wallach as Milt, and Anne Jackson as Ellen. A film adaptation was released in 1967, directed by Clive Donner and starring Jack Lemmon as Harry, Peter Falk as Milt, and Elaine May as Ellen.