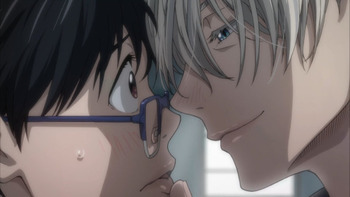 "No one in the whole wide world knows your true eros, Yuri."

The evolution of the relationship between one of the most celebrated couples in modern anime.

Episode 4
Episode 5
Oh, where to begin?
Episode 6
Just like Steven Universe, with every episode people said it couldn't get gayer. Episode 6 proved them all wrong.
Episode 7
Let's just say that the Ship Tease in this episode went Up to Eleven and beyond. note 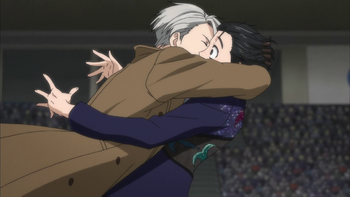 Love wins!
Episode 8
Episode 8 may be a breather, but that doesn't mean things are getting any less gayer.

Episode 9
Twice, only twice do they interact in this episode. And yet...
Episode 10
A smorgasbord of homoerotic revelation. note 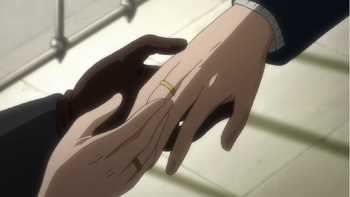 "Thank you for everything up till now."
Episode 11
This episode may be the most emotionally-devastating one to date, as well as the most lacking of moments between Victor and Yuri, but there still is...
Episode 12
Get ready: this is the Grand Finale... at least of Season 1.