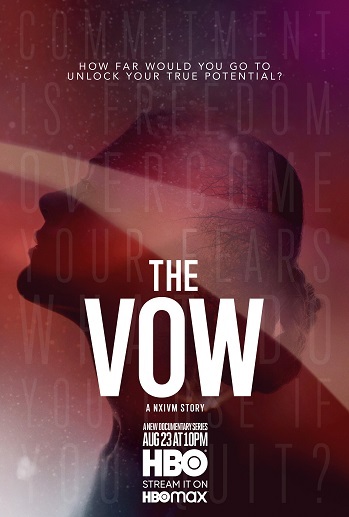 How far would you go to unlock your true potential?
The Vow is a documentary series by HBO, premiering on August 23, 2020. The series follows members who joined the self-improvement group NXIVM – whose leader, Keith Raniere, was convicted of sex trafficking and racketeering conspiracy, among other crimes – and reveals the emotional toll of unfolding events. Former members Sarah Edmondson, Mark Vicente, Bonnie Piesse, Anthony Ames and Barbara Bouchey appear in the series. Catherine Oxenberg appears in the series as she attempts to rescue her daughter India.
Advertisement:

Not to be confused with the 2012 film of the same name, or the fanfic which also shares the same title.

''We didn't join a cult! Nobody joins a cult! Nobody! They join a good thing, and then they realize they were fucked!
—Mark Vicente