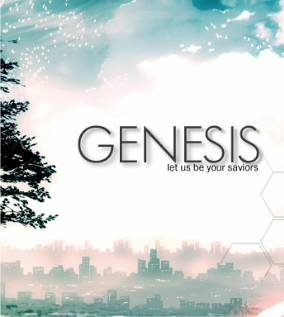 Adolescents with super-human powers? What Could Possibly Go Wrong?
"Interchanging mind control
Come, let the revolution takes its toll
If you could, flick the switch and open your third eye
You'd see that we should never be afraid to die

Rise up and take the power back
It's time the fat cats had a heart attack
They know that their time's coming to an end
We have to unify and watch our flag ascend, so come on

We will be victorious!"

GENESIS is a military organization/ sci-fi roleplay located on the forums of Gaia Online.

The story starts with three groups of genetically altered young adults, each having been engineered by a not-so-secret company called GenetiCorp. Some of these kids volunteered for the experiments- however, others did not. The first batch of super-humans made in this project were deemed ineffective. The kids were thrown out onto the streets, with no family to remember them. It was a big suprise when they turned out to have powers after all. Powerful powers. They formed a group called Genesis, whose main goal was to expose the unethical and horrible treatment by GenetiCorp while dismantling the establishment. The second batch were called Agents. No, not those agents. They were at GenetiCorp's beck and call. Agents weren't as powerful as the members of Genesis, however, they were well loved by the citizens for being peacekeepers... Unlike Genesis. A third project was started on a while later to replace the Agents: Project Omega. These individuals were almost as powerful as the members of Genesis, but they were confused about their purpose, so escaped from the GenetiCorp headquarters. The Agents and Genesis rush to recruit these lost souls to help with their cause, but GenetiCorp has their own plans...

The main thread of the roleplay is located here