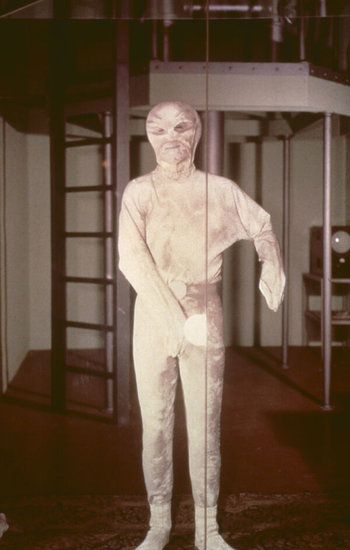 A color publicity still of the alien inside its shield. 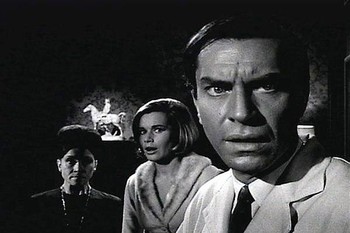 Mrs. Dame, Judith and Richard behold the alien.
The Control Voice: There is a passion in the human heart which is called aspiration. It flares with the noble flame, and by its light Man has traveled from the caves of darkness to the darkness of outer space. But when this passion becomes lust, when its flame is fanned by greed and private hunger, then aspiration becomes ambition – by which sin the angels fell.

When scientist Richard Bellero Jr. (Martin Landau) accidentally brings an alien (John Hoyt) to Earth, his wife Judith (Sally Kellerman) kills it and passes its shield off as her husband's invention, with disastrous consequences.

The Control Voice: When this passion called aspiration becomes lust, then aspiration degenerates, becomes vulgar ambition, by which sin the angels fell.