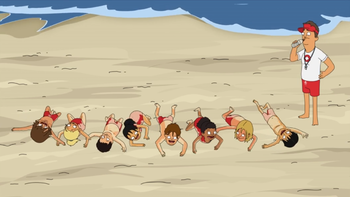 "Sugarcookies!"
"I want to be a lifeguard because... [imagines herself rolling around with boys on the sand]"
—Tina

Tina proves a hindrance when she joins a junior lifeguard program. Back at the restaurant, business booms when Linda gives out the wi-fi password.