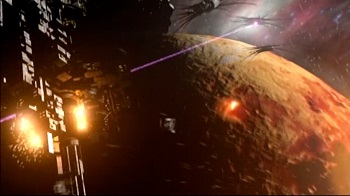 The Coming of Shadows

Emperor Turhan: How will this end?
Kosh: In fire.

On the planet Centauri Prime, the Emperor of the Centauri Republic is preparing to make a State Visit to Babylon 5. He is informed by the prime minister that everything is ready but he has concerns about the emperor's poor health. The emperor is only more determined to do this now, since he has little time left.

On Babylon 5, G'Kar is in Sheridan's office vehemently protesting the approaching visit, listing atrocities committed against the Narns by the emperor's father, but which he himself, Sheridan points out, did not take part in. In fact the current emperor has gone out of his way to make reparations to the Narns. G'Kar is not placated, and blows off Sheridan's suggestion that he try to open a dialogue, before storming out. Sheridan warns him not to do anything they'll both regret. G'Kar replies that it's too late for that.

Meanwhile a man arrives on the station seemingly looking for Mr. Garibaldi.

As the emperor arrives, Londo meets with Lord Refa. Refa has prepared a speech for Londo, predicting several changes that Refa has already arranged in an effort to make the emperor appear foolish and short-sighted. After he leaves, Vir expresses his discomfort with the whole notion, and Londo agrees. The emperor comes aboard, and is greeted by Sheridan and his senior staff. They exchanges greetings and Sheridan offers a tour of the station. The emperor wonders if it would be possible to meet Ambassador Kosh, as he is curious about the Vorlons.

G'Kar, meanwhile is on a call to the Narn homeworld. The Kha'Ri have approved his plan; he intends to assassinate the emperor. He reflects for a moment on the possible outcomes: "In the moment that I strike, the emperor and I will both die. Or, he will die and I will spend my life in prison. Or, I will fail and be killed. For the first time in my life, the path is clear."

The emperor, meanwhile, is in the observation dome, looking out into space. Sheridan finds him there and the two spend a few minutes talking about choices, the emperor regretting that he never really made any in his life. G'Kar, his choice made, is preparing a will in the event he is killed or captured. He says that he acted alone and that the Narn government should not be held accountable for his actions, nor Na'Toth.

At the reception, Sheridan and his officers talk about the veiled Centauri women following the emperor, who are apparently telepaths who have been raised together since birth, so they all know each other's thought no matter how far apart they are. They suddenly notice G'Kar arriving, and when asked, G'Kar says that he will listen to the emperor.

Meanwhile, the man who arrived earlier has been following Garibaldi, who finds it suspicious and has him locked up for the time being.

As they wait for the emperor, G'Kar clutches at his dagger. The opportunity to use it never arrives, as the emperor suddenly collapses while on the way to the reception. On Centauri Prime, the other two telepaths enter the court, and the prime minister rises, seeming to fear the worst. Sometime later, the emperor wakes up in Medlab. Despite his health, he has a very important message, and he asks Franklin to deliver it for him.

Londo and Refa are meeting again. The competition is already lining up to take the throne when the emperor dies, and Refa wants something that will separate them from the pack. Londo has a sudden flash of inspiration. He proposes they take over a Narn outpost in Quadrant 14. He tells Refa to arrange for a military force to be sent there. After Refa leaves he tell Vir to find Mr. Morden. Vir desperately tries to talk him out of it, but eventually relents and goes to find him, warning Londo that one day he'll remind him of this conversation. Londo darkly replies that he already understands:

Londo: By this time tomorrow, we will be at war with the Narns. May the Great Maker forgive me.

G'Kar is in his quarters when Dr. Franklin arrives. He has an important message from the emperor; he wanted to apologize. He risked his own health to come to Babylon 5 and apologize for everything the Centauri have done to the Narns. G'Kar is floored, he never imagined the emperor would come here for that reason.

Londo is sleeping in his quarters, and begins to dream. He sees a hand reaching out of what appears to be a star, then Centuari Prime, then himself standing on it as Shadow ships fly overhead. He then sees himself being crowned emperor, then himself as an old man, and finally G'Kar strangling him...

He suddenly wakes up and checks the time. "It has begun."

In Quadrant 14 Shadow ships appear in the surrounding space and quickly destroy everything in the area. Back on the station, Londo informs Refa that he can move at any time. Refa walks off, saying something about removing one last obstacle, and G'Kar appears moments later. Londo panics, thinking the Narn has already found out about the attack but G'Kar offers to buy him a drink. As Londo listens in astonishment and dismay, G'Kar tells him how he finally found decency in a Centauri, which gives him hope that maybe someday their two races can be reconciled after all. "To the health of your emperor, and perhaps to your health too."

A force of Centauri warships arrive at Quadrant 14 as well as a Narn patrol. The Narns assume the Centauri are responsible and move to attack. On Centauri Prime, the prime minister is pacing in the darkened throne room when he is attacked and stabbed in the stomach by an unseen assailant.

Garibaldi is in his office when he is informed the prisoner wants to speak to him. The man gives him a datacrystal, which has a message for him from someone he knows.

Sinclair says the messenger is a Ranger, part of a force he and the Minbari are building to combat a darkness that is growing. He can't say much but he asks for Garibaldi's help.

Meanwhile the news about Quadrant 14 starts to arrive. Sheridan is informed by Ivanova, and G'Kar finds out from the Kha'Ri. G'Kar flies into a rage, and heads off toward Londo's quarters. Before he gets there, he meets Sheridan and a force of security guards. The captain tells him to return to his quarters and no charges will be pressed. G'Kar is not willing to leave, he wants to make Londo pay. Sheridan tells him to make a choice: revenge, or doing what he can to help his people. G'Kar slams his fist into the wall, then breaks down in tears. Sheridan decides to leave him be for now.

In Medlab, the now severely weakened emperor lies in bed, wishing he could have seen a Vorlon. He suddenly becomes aware of a presence next to him and looks up to see Ambassador Kosh over him. "How will this end?" he asks.

Garibaldi tells Sheridan some of what he learned from the message. There have been rumors about some new race out there, and he has found out there are links to the Centauri government, possibly even the ones who attacked Quadrant 14. Sheridan thinks they can use this information to bluff Londo.

Londo and Refa are gathered with others around the emperor's bed. Refa gives him the "good news" that they have taken Quadrant 14 without a single Centauri casualty. The emperor whispers his response to Londo, then dies. When asked, Londo tells them that the emperor said, "Continue. Take my people back to the stars." The others leave, and Refa asks Londo what the emperor really said.

Londo: He said that you and I are both damned.

Refa laughs, and says it's a small price to pay for immortality.

Sheridan comes to G'Kar and invites him to a meeting of the Council. G'Kar says he will be there, then thanks Sheridan for stopping him. At the meeting Sheridan demands of Londo to know how the survivors at the colony will be treated. He then says Earth will be sending observers to check on the situation, and find out how the colony was defeated so quickly. Londo agrees that they could be released to return to the Narn homeworld, as long as no observers are sent.

G'Kar then arrives with grim news. He has received a message from his government declaring a state of war with the Centauri Republic.

Refa's gambit has paid off, and Cartagia, the emperor's nephew, has been crowned. After he leaves, Vir asks Londo why he didn't ask for a high government position. Thinking about his dream, Londo says he prefers to work from behind the scenes.

As Garibaldi sees the Ranger off, he asks if anyone else knows about this. The Ranger replies, "Just one other." In her quarters, Delenn watches a message: "Hello, old friend...."