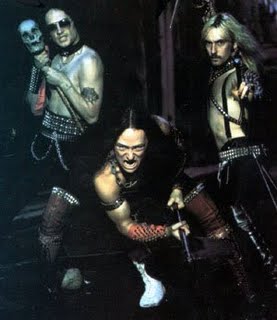 Venom is a metal band from the United Kingdom. To try and stand out from the other artists, they were the first metal band to introduce a highly satanic image and lyrical approach, thus becoming the very first First Wave of Black Metal band. Their fast music was also very influential to the Thrash Metal genre. Despite helping launch two of the most prominent genres of metal today, even in their most popular years they were criticized by some for their deliberately simplified music and lack of technical ability. However, they made up for that with enthusiasm and good showmanship.