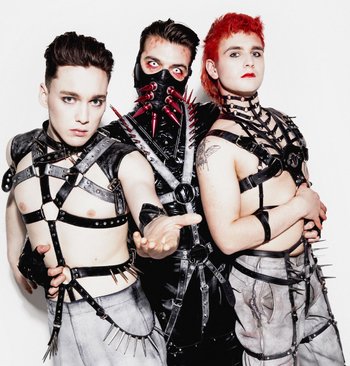 Left to right: Matthías, Einar, Klemens
"Hatari is a multimedia project that aims to reveal the relentless scam that we call everyday life."
— Klemens Hannigan

After Eurovision, Hatari embarked on a tour across Europe for the rest of 2019, and in January 2020 released a full-length debut album, Neyslutrans.

Definitely not to be confused with the Howard Hawks/John Wayne 1962 film of the same name.

Why did I trope myself so cheap?