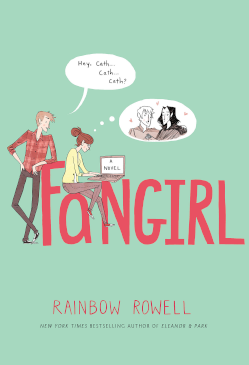 Fangirl is a 2013 Young Adult novel by Rainbow Rowell.

Cath writes Simon Snow fanfiction; Simon Snow is a fictional expy of Harry Potter, and there are eight books in the series about him. Specifically, Cath writes Slash Fic about Simon and his nemesis roommate Baz, a vampire with a Missing Mom. For a long time she and her twin Wren grew up with Simon Snow, dreaming of attending Watford School of Magicks. But now things are changing: the girls are off to college, too old to attend Watford. Book Eight will be released soon, so Cath has to finish her newest fanfic before canon is out.

Wren also drops a curveball: she doesn't want to room with Cath. She wants to leave Simon Snow behind, and grow up without her sister. That's only the first of many obstacles for Cath, as she tries to impress a Fiction professor with fanfiction and not kiss her roommate's boyfriend.

Rowell has also written a companion novel that defictionalizes Simon Snow fanfiction, Carry On. Its own popularity made it expand into a trilogy.

In 2020, Rowell partnered with Viz Media to adapt Fangirl into a manga miniseries. Part 1 was released in the fall of 2020.