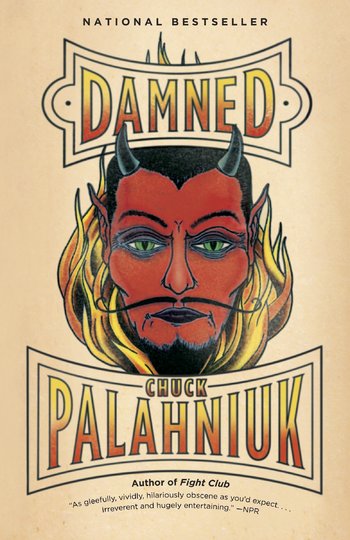 Are you there, Satan? It's me, Madison.
Advertisement:

Damned is a 2011 book by Chuck Palahniuk.

From Chuck Palahniuk, the bestselling author of Fight Club, comes a dark and brilliant satire about adolescence, Hell, and the Devil.

Madison is the thirteen-year-old daughter of a narcissistic film star and a billionaire. Abandoned at her Swiss boarding school over Christmas, she dies over the holiday, presumably of a marijuana overdose. The last thing she remembers is getting into a town car and falling asleep. Then she's waking up in Hell. Literally. Madison soon finds that she shares a cell with a motley crew of young sinners: a cheerleader, a jock, a nerd, and a punk rocker, united by their doomed fate, like an afterschool detention for the damned. Together they form an odd coalition and march across the unspeakable landscape of Hell—full of used diapers, dandruff, WiFi blackout spots, evil historical figures, and one horrific call center—to confront the Devil himself.

A sequel would later be published in 2013 named Doomed.