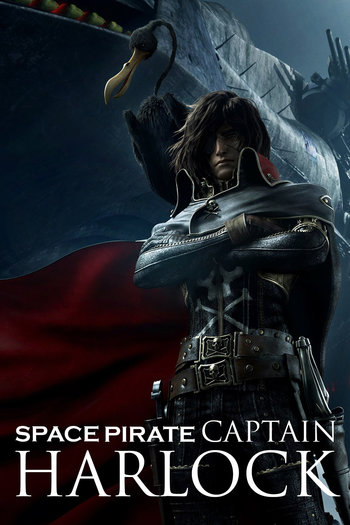 Far in the future... or perhaps the past... humanity has spread to the stars. Due to an inability to terraform worlds and a lack of any truly viable alternatives, the species eventually turns back to Earth to re-settle. But there is no way the planet can support five hundred billion souls, and the Homecoming War is fought over who deserves the right to return. The Gaia Coalition eventually rises out of the ashes, as a government that unites the people around the idea that Earth should remain a pristine sanctuary, with no humans sullying her.

A hundred years later, humanity is dying, as the worlds they live on were never designed to support human life. Plants can never gain purchase in the ground for long, and food is running out. The only one who seems to be doing anything is Captain Harlock, the immortal pirate aboard his ghost ship Arcadia. Yama (Logan in the official English adaptations), a young man secretly in the employ of the Gaia Coalition, manages to earn a spot on the ship, where he learns that both the ship and the captain are immortal due to the dark matter engine, a gift from the alien girl who still operates it.

Furthermore, Harlock has a plan to fix everything. By detonating one hundred bombs on one hundred precise points throughout the galaxy, he can reset the Genesis Clock, turning back time and starting over. Of course, the people in power aren't particularly interested in that plan...

Based on the anime Captain Harlock, the movie is an all-CGI reboot of the franchise, which was released in English in 2014. It can be viewed legally on Netflix as Harlock:Space Pirate.