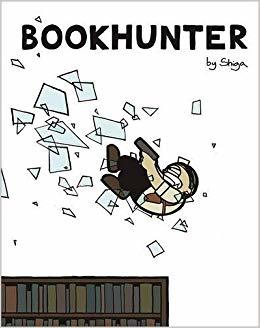 "We guard no less than the sum of all human knowledge. We are the Library Police."
— Agent Bay
Advertisement:

is a comic book by Jason Shiga.

In 1973, a priceless book is stolen from the Oakland Public Library. Three agents from the Library Police are called in to investigate: Agent Bay (detective), Agent Walker (document analyst), and Agent Finch (fingerprint expert).

Their investigation manages to hit all the usual Police Action Film tropes: foot chases, Perp Sweating, swarming the suspect's apartment with the SWAT team, and so on. The fact that it's the Library Police doing all this is played so straight that the entire thing ends up as a Stealth Parody of the genre.

The book can be purchased on Amazon, or read here