Some of the more important people out and about in Sumaru City, from possessed rumor-mongering private detectives to old cast members from Persona.

A middle-aged, overweight Private Detective who runs the Kuzunoha Detective Agency in Hirasaka (relocated to Kounan in Eternal Punishment). According to rumors, he used to be an incompetent, third-rate detective, but his intelligence spiked due to a mysterious circumstance. As a result, Todoroki is a frequent font of wisdom as well as a reliable authority on the occult. He plays a vital role in Persona 2, uncovering the nature of Sumaru City's curse before even the authorities manage to. Todoroki offers to spread helpful rumors for a fee, thus allowing them to become reality.

Maki works part-time at Hiiragi Pyschotherapy in Sumaru City in hopes of becoming a therapist like her employer, Reiko. She feels that helping troubled people is the best way for her to cope with the fact that she almost destroyed her hometown because of her fantasy world coming to life and almost completely superimposing the normal one.

She will later receive a flower from the Time Count, and give it to Jun as his ultimate weapon. Maki mentions what she was told by the count about the flower, that it was "the representation of a destiny that must be passed on". Maki will eventually fight alongside her former classmates from St. Hermelin once more to repel the invasion of Sumaru City by Hitler's Last Battalion if certain conditions are met earlier in the game.

In Persona 2: Eternal Punishment, Maki's role as a supporting character is somewhat more significant. She feels the resonance of a Persona from Maya Amano, and is able to tell from this that the latter is acquainted with Yukino Mayuzumi, a former classmate of hers. She later appears at the Science Lab scenario in Kei Nanjo's route. Along with Reiji Kido, she will help Maya's party through the sewer entrance, coordinating their movements with the floodgate controls. Maki will rejoin the rest of her former classmates later in the game, fighting off the New World Order soldiers that are trying to take over the city. 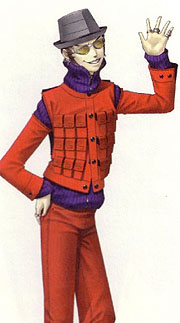 Brown is a returning character from the first Persona, now a supporting character. Now a popular variety-talk show host, his ego has swelled to the point of no return, especially getting nationwide attention for the rumor that he is the boy toy of actress Junko Kurosu (which turns out to be false, since he actually despises the actress for having as big an ego as he does. Even so, he still addresses the latter as "Junko-chan"). If certain conditions are met, he will fight alongside his former classmates from St. Hermelin once more to repel the invasion of Sumaru City by Hitler's Last Battalion, assisting Tatsuya Suou's party so they can go to Xibalba.

In Eternal Punishment, Brown is still a supporting character. He will assist Maya Amano's party through the Tv studio, scouting out the correct order of Chiruzu's medallions to help them escape the "Kimon Tonkou" spell that has imprisoned them. Hidehiko will rejoin the rest of his former classmates later in the game, fighting off the New World Order soldiers that are trying to take over the city.

Like Maki and Brown, Reiji is a returning alumni from the first Persona. He makes an appearance in both Persona 2 games as an NPC. He has long since shed his badass image — even going as far as changing his hairstyle to conceal the scar on his forehead — and is working a door-to-door knife salesman to support his live-in girlfriend (referred to as his wife, whom he married directly out of high school, in the remake of the first Persona) who is carrying his baby. Unfortunately, his Persona still exudes the same kind of intimidating aura, scaring away potential customers. He reluctantly asks for advice from of fellow St. Hermelin alumnus Kenta "Toro" Yokouchi, whose own Persona has made him very successful.

His new hairstyle, however, made him look strikingly similar to his hated stepbrother, so rumors started circulating about Kandori being sighted in Sumaru City, which piques the interest of Kei Nanjo. Reiji can later be found in the Abandoned Factory, where he beats up on demons to blow some steam. Lisa Silverman will 'persuade' him into giving up his Legendary American Gloves.

Later in the game, he will join his former St. Hermelin classmates in the fight against Hitler's Last Battalion unless certain conditions are met earlier in the game. In Eternal Punishment, he will appear in Kei Nanjo's route to the Science Lab. With Maki Sonomura in tow, Reiji will assist in the party's covert infiltration of the lab through the sewers by operating the floodgate controls. He will once again team up with the St. Hermelin alumni later in the game, this time to fend off the New World Order soldiers trying to take over the city. 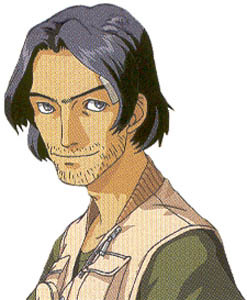 A photographer for Kismet Publishing, and Yukino's boss/mentor. His petnames for Maya and Yukino are "Mackey" and "Yuki".

In Innocent Sin, he was a Masked Circle minion under Queen Aquarius who performed the Joker Charm, wishing to become the sexiest man alive. He was interrupted from fighting Tatsuya's group at the fitness club GOLD when an angry Ulala Serizawa chased him out, threatening to kick his ass for stealing her money and suddenly disappearing. In Eternal Punishment, Makimura is pulled out of another scam attempt and taken along while Maya's party searches for Ulala at GOLD, believing that he was the one targeted by the Joker Curse she performed.