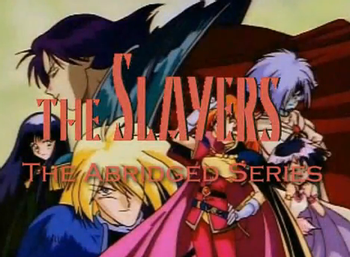 "Do you work in a pet shop?"
— Amelia
Advertisement:

In August of 2008, YouTube user projectshadow99 watched Megami33's Sailor Moon Abridged and realized that people other than LittleKuriboh could be successful making abridged series, so he decided to make one of his own. After finding no other Slayers Abridged series online (save for one which hadn't been updated in a long time and only lasted a few episodes), he wrote, recorded, edited, and released his first episode in six hours. The final result was...less than stellar, with rather bad writing, and at times, terrible editing. He originally quit after the first four episodes, but then released a fifth episode four months later. Then he stopped again and didn't begin producing episodes regularly again until August of 2009, with somewhat better writing and editing. After releasing about six episodes within three months, he began releasing episodes about every two months, something he is desperately trying to avert. He eventually began releasing updated and better versions of his first few episodes in September of 2010, while at the same time making new episodes. Although he originally started the series to get attention, he quickly began to like writing, acting in, and releasing the episodes, even though he doesn't do it as much as he used to.

The Slayers Abridged stars Lina Inverse, a whiny sociopath who's desperate for screen time. She travels with her companion, the at times complaining and at times stupid Gourry Gabriev. Along with the now game-obsessed Zelgadis and over the top and at times trigger happy Amelia, they fight numerous forces like a demonic chairman, two familiar sounding mercenaries, and the dreaded Sony corporation.

The entire series can be viewed on projectshadow99's YouTube Channel here