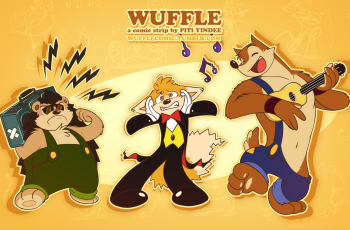 'Wuffle'' is a Comedy Furry Web Comic created by Piti Yindee. It is about Wuffle, a Big Nice Wolf who's a Farm Boy by trade, and his everyday life in Gingerbread Village with friends Pui Pui the hedgehog and Foxxo the fox.

Wuffle is for all ages, aiming to be more like the nostalgic comic strips of old.

, and is free to syndicate and reuse for any reason.