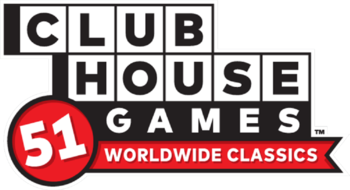 Clubhouse Games: 51 Worldwide Classics (known as 51 Worldwide Games in Europe and Australia) is a board and card game compilation released for the Nintendo Switch on June 5th 2020. It was developed by NDcube as a successor to Clubhouse Games (known as 42 All-Time Classics in Europe) on the Nintendo DS and published by Nintendo. As the title implies, the game is a compilation of 51 various board games, card games and toys, ranging from well known games like Checkers (Draughts in the PAL release), Chess and Four-in-a-Row (Connect Four in Japan), to more obscure games like Carrom, Hare and Hounds and Sevens, as well as including a small handful of original games like Toy Tanks and Sliding Puzzle.

Along the way, a family of board game figures will show you how to play various games and guide you through them.