Useful Notes / The Catholic Monarchs
aka: Isabella I Of Castile 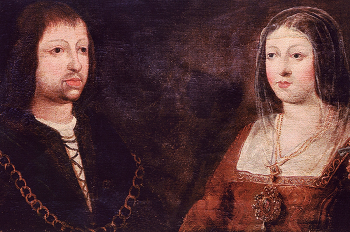 In the centuries preceding their rule, a number of Christian kingdoms had emerged around the Iberian peninsula and participated in the Spanish Reconquista, including Aragon (where Ferdinand was from) and Castile (where Isabella was from). These kingdoms had had their individual shares of succession crises and civil wars.

Ferdinand and Isabella were second cousins, both members of the House of Trastámara. He was the son of John II of Aragon (whose own father had gained the Aragonese crown after one such succession crisis) and was named King of Sicily in 1464. She was the daughter of John II of Castile and his second wife, making her the younger half-sister to the eventual king, Henry IV of Castile. After a series of failed political matches, Henry eventually agreed to allow her to plot her own marriage, a card she used to take the throne when the complicated matter of Henry IV's succession arose. Ferdinand and Isabella eloped in 1469, a union that Henry IV disapproved of. Though they were close in age and got on quite well by most accounts, it was not a Marry for Love situation as much as it was a very politically strategic union — the marriage gave them the path to control what would eventually become Spain.

After Henry IV's death in 1474, Isabella promptly declared herself Queen of Castile and León and disinherited her niece Joanna, who was wed to Alfonso, King of Portugal. Cue the War of the Castilian Succession, during which Ferdinand and Isabella were vested as equal rulers. The war against Portugal ended in 1479 with Alfonso renouncing his claim to the Castilian throne. Isabella set about unloading Castile of the significant debts Henry IV had accrued through institutional reform; she and Ferdinand developed a reputation for overall good management of their shared throne.note though Castile and Aragon remained separate kingdoms; they would not be formally united as one state until the Nueva Planta decrees during and after the War of the Spanish Succession in the early 1700s. Ferdinand and Isabella's crown moved often in order to maintain unity.

They are famous for ending the Spanish Reconquista by conquering Granada, which eventually fell in 1492. The Spanish Inquisition, founded by Isabella to stamp out heresy, played a big part in this. Their moniker of "The Catholic Monarchs" was given to them by Pope Alexander VI due to their efforts to make Roman Catholicism the sole religion in the nation for their shared vision of a unified Spain. Though the treaty signed in the aftermath of the fall of Granada promised religious freedom for Jews and Muslims remianing in Spain, the monarchs carried out the Alhambra decree in 1492, after which practising Jews in Spain were expelled. Muslims were also subject to forced conversions to Christianity in the succeeding years. These religious minorities either left Spain or converted only in name.

Three months after the fall of Granada (which had greatly cost the crown), the Catholic Monarchs sponsored Christopher Columbus's initial voyage to the Americas. They were then present for the establishment and management of the colonies in the Caribbean, which brought the nascent Spanish empire great wealth. Gonzalo Fernández de Córdoba, a general under their command nicknamed El Gran Capitan, is credited with reforming the Spanish army into a force to be reckoned with on the European battlefield. Ferdinand then concerned himself with the Italian Wars, specifically over succession in the Kingdom of Naples.

Ferdinand and Isabella had several daughters, whom they married off with strategic alliances in mind. Isabella of Aragon wed Manuel, king of Portugal (who then wed the younger sister, Maria, after Isabella II's death). Joanna of Castile wed Philip "The Handsome" of the House of Habsburg, and Catherine of Aragon is most famous for being Henry VIII's first wife. However, Ferdinand and Isabella's son and heir, John, Prince of Asturias, died before either of them at the age of nineteen in 1497 without issue.

Isabella died in 1504 and Joanna inherited the crown of Castile. Due to Joanna's reputation as "Joanna the Mad", Ferdinand remained in Castile as king consort after Isabella's death, though this position remained precarious. He married Germaine of Foix in 1506 to stop the Aragonese crown from falling into Habsburg hands but the marriage produced no heirs. After Ferdinand's death in 1516, the united Spanish crown and its territories passed to Joanna's son, Charles V.

Portrayals of their marriage and reign in media:

Alternative Title(s): Ferdinand II Of Aragon, Isabella I Of Castile