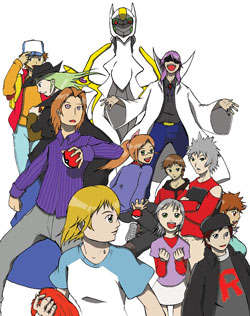 Taking place after the events of Pokémon Black and White, the story consists of the tales of Trainers who can talk to their Pokémon, who under fear of persecution, concealed the facts of their abilities since birth. They travel all across the Pokémon world in an attempt to discover why they have these powers and possibly dip into the world's tales of creation.

You'll find examples of these tropes in this roleplay: