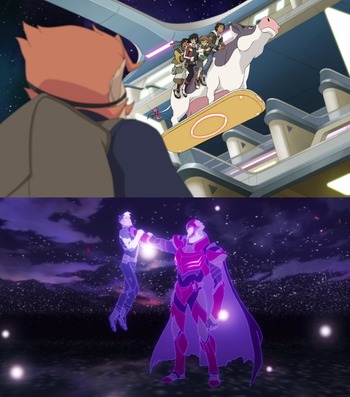 Zany space mall adventure and near death experience, all in one episode!

Allura: What did you do? Take a nap?
Shiro: Not exactly.

Coran and the Paladins go off to find more teleduv lenses needed to repair the castle's wormhole while Shiro stays behind to strengthen his bond with the Black Lion. While the Paladins end up with a crazy adventure at the Mall, Shiro comes face to face with Zarkon in order to fight for control over his Lion.

Tropes for this episode include the following: