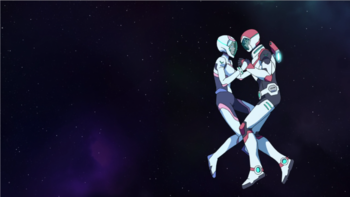 Taujeerian: I would feel more comfortable with all five paladins.
Shiro: Duly noted.

After a narrow escape from Zarkon, Allura and Keith are convinced that they are responsible for Zarkon tracking them. As they sneak out at night to see if this is true, Pidge programs an algorithm to track Galra activity on various galaxies, so as to take the battle to the Galra. They end up in the Ark of Taujeer, where the inhabitants are stranded on a planet that will shed its skin and turn into a celestial body of acid.

Tropes for this episode include the following: