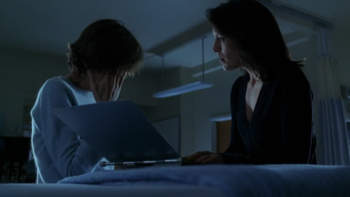 "There's ... there's something wrong ... you know, up here. And I can't help anyone."
Written by Steven Maeda
Directed by Kim Manners
"And inside an hour, the hospital plans to cut off [Monica's] life support. Now, I'm not going to let that happen - no matter what it takes. But I'm losing here. Nobody else believes she's alive. Nobody - just you and me."
— John Doggett
Advertisement:

Reyes is taken to hospital after a car accident and falls into a coma. She finds herself in a dark dreamscape with the hospital's other comatose patients and a mysterious hospital worker (Tracey Ellis). Meanwhile, in the waking world, Doggett suspects that something is not right about Reyes' condition.