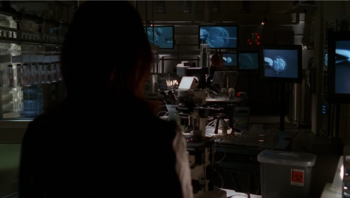 "I have to see if I'm here. My name, my baby's name..."
Written by Chris Carter & Frank Spotnitz
Directed by Tony Wharmby
Shannon: The program's expanding in ways no-one ever dreamed of. I need your help to stop it, John.
Doggett: You need my help? What can I do?
Shannon: Expose the deaths of those two men I killed. What they were doing.
Advertisement:

Shannon McMahon is a super soldier and an old friend of Doggett's. She helps him learn more about the super soldier program and a plan to contaminate the water supply.

Kersh: On July 4th 1776, [King George the Third] made an entry in [his diary]: "Nothing Important Happened Today".
Doggett: What the hell has that got to do with me?
Kersh: Revolutions start, things that change the world forever, and even Kings can miss them if they're not paying attention.