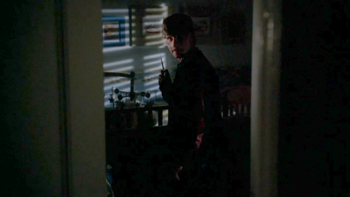 "I... he begged me to honor it. For your safety ... and William's."
Written by David Duchovny (Story), Frank Spotnitz (Story) & Chris Carter (Story & teleplay)
Directed by David Duchovny
Doggett: He says he wants revenge against the people that burned him. And Mulder directed him to the place where he could find the files and the people who did it.
Skinner: That doesn't make any sense. Mulder knows those files inside out. Why would he direct him? Why not just tell him?
Advertisement:

A mysterious and hideously scarred man (Chris Owens) approaches the agents, claiming to have information about a new alien conspiracy that has replaced the old Syndicate. The possibility is raised that he might actually be Mulder.

♫ Milk and honey on the other side, hallelujah. ♫