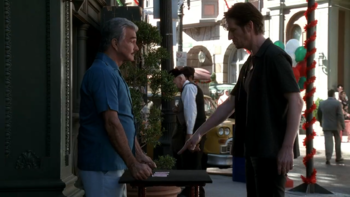 Dio Ti Ama Translation "God loves you" in Italian.
Written and directed by Chris Carter
Doggett: But don't we at least have to accept that as a possibility?
FBI agent: No, we don't.
Reyes: Why?
FBI agent: Because it's highly improbable.
Doggett: But not impossible.
Advertisement:

The agents pursue a serial killer (Ray McKinnon) who appears to be choosing his victims based on numerology, encountering a strange man (Burt Reynolds) in the process.

As Burt sings "Ponciana", the motions of the people around him unexpectedly fits the song's beats.

As Burt sings "Ponciana", the motions of the people around him unexpectedly fits the song's beats.